MiniDBA gives you a SQL Server memory dashboard which is designed to help you gain performance and future proof your applications through intelligent memory use. There are lots of areas of SQL Server memory use which are combined into a single dashboard. Charts allow visualizing consumption over time and identifying trends.

As well as real-time memory performance the miniDBA gives advice and best practise links (in the tooltips) plus detailed alerts when memory thresholds are broken. Historical tracking of memory consumption also alows you to see memory at a point in time plus consumption by session and schema object. An extensive list of memory settings and properties (listed below) allow you to see how memory is being used by the operating system as well as the buffer/plan caches.

The screen is broken into the performance dashboard and object usage tabs. 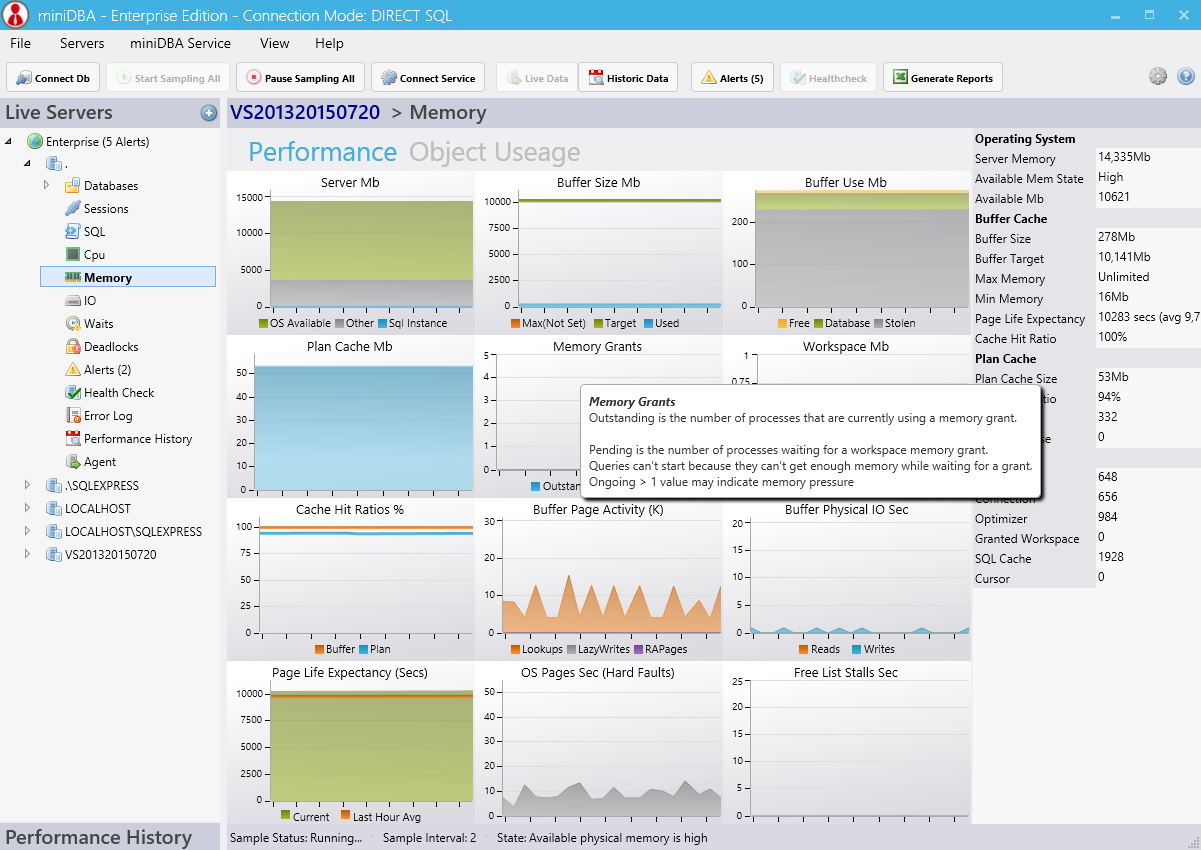 "SQL Instance" is total memory this instance of SQL Server is using.
"Other" is all other programs and services running in Windows (including the OS).
"OS Available" is memory not being used by any program which the OS can allocate if it needs to.

Max displays the maximum buffer size if it has been set. If there is no max then the line is not displayed.
Target is what the optimum memory SQL Server would like to have.
Used is what is actually being used by SQL Server

Buffer Contents - How the buffer cache is being used

Free memory is committed memory currently not used by the server.
Database memory is being used by databases to store their data.
Stolen memory is taken from the buffer pool to use for miscellaneous server purposes (including procedure cache).

The amount of memory being used to store execution plans.
This is part of the servers stolen memory.

The metrics display activity within the SQL Server memory buffer.
Lookups are logical reads of data required to satisfy the query which may spill to disk.
Lazy Writes are the number of times per second SQL Server relocates dirty pages from buffer pool (memory) to disk. If it is above 20 then memory pressure may be present.
Read Ahead Pages are physically read from the disk as an internal performance enhancement.

Physical reads and writes to and from the buffer cache.
Because physical I/O is expensive, you may be able to minimize the cost by:

Number of seconds a page will stay in the buffer pool.
This number can be extremely high, pages may stay in the cache for days, so there is no absolute number to look for, just large relative drops.
The average over the last hour is displayed, to help identify any drops.

The rate at which pages are read from or written to disk.
The average Pages/sec value should be below 50.
Memory pressure may be indicated by consistently high pages/sec.

The properties on the right hand side of the dashboard give extra insight into the current state of extra memory objects:

The amount of phyical memory installed

Amount of free memory that is available to the operating system

Normally a good idea to set this to lower than the installed memory so the SQL Server doesnt consume all free memory, which could lead to the operating system not getting enough memory
MSDN article

Number of seconds a page will stay in the buffer pool

The amount of memory being used to store execution plans, this is part of the servers stolen memory

% of batches that have existing plans in the cache

Number of plans in the cache

Plan Cache Objects In Use

memory the server is using for the dynamic SQL cache

dynamic memory the server is using for locks

dynamic memory the server is using for maintaining connections

dynamic memory the server is using for query optimization

The grids will update when you click the "Refresh" button and will tell you Mb used per database.

Caches are how internal plan memory is being consumed. Caches compete for memory and can cause other caches to get flushed. Performance degradation is likely when this occurs.
SQL Server has a hard limit on all caches and soft limit on each individual cache. The hard limit changes from version to version and also the memory available. The soft limit is limited to 62.5% of total cache size. Any cache can grow to 62.5% of the total cache limit (hard limit).

Every component that allocates a significant amount of memory must create its own memory clerk and allocate all its memory by using the clerk interfaces. This is a good view to investigate memory pressure as the largest memory allocations will be at the top of the data grid.